We are in the process of moving this blog over to the official Hollaback Chicago site. (Located at http://chicago.ihollaback.org/) Please email us at emchicago@ihollaback.org with any questions.

Thank you,
Katie Davis
Posted by Unknown at 10:14 AM

I was walking down the street on Winthrop ave. near the Granville Red line stop when two men, with beer in hand, screamed, "You are Fucking Sexy" "Stop and talk to me!" You Can't walk away from me" "Who do you think you are to walk away from me!" My shocked face looked behind and shot a mean glance, but I didn't know what to do, I just ignored and walked away. I couldn't say anything, I couldn't stop and have a conversation. I was embarrassed and threatened. I questioned what I wear outside (It was 100 degrees) and thought maybe I should cover up more. I don't want to live in a world like that.

Sumbitted by Liz
Posted by HollaBackCHITOWN at 11:18 AM

My ex posted this and it disgusted me.
When they had that NATO thing going on he commented that the one good thing about it was the "tittie parade". He defended it by saying he was appreciating the female figure. Yeah....cause nothing makes a female feel appreciated like being called a tittie parade. We aren't women. Just a parade of tits. He is such a pig.
~Submitted by JR
Posted by HollaBackCHITOWN at 10:37 AM

This cretin tried to hit on me at Pops while his SO was in the bathroom and refused to back off despite my repeatedly telling him to do so. 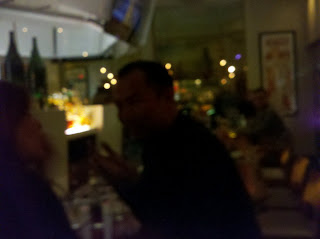 Posted by HollaBackCHITOWN at 12:00 PM

If You Live in Chicago, You've Seen this Guy

There is a homophobic preacher who stands outside the Old Navy on State Street. He shouts into his microphone about the horrors of gays, and I can hear it from my apartment - it causes me terrible anxiety. I have asked him several times to stop, I tried to have a dialogue with him about it... I even screamed at him, and he refuses to stop. Please make him go away.

Posted by HollaBackCHITOWN at 11:51 AM

Next time I see him, I am going to report him.

There's a guy who takes the 147 headed North during the morning rush. He's about 30-ish, about 5'8", medium build, medium length dark brown hair (slicked down), always wears sunglasses (large mirrored ones), appears to be Latino. He has a very trimmed facial hair - basically a chin strap. He usually gets on the bus at Pearson and Michigan and gets off at Foster/Marine.

On several occasions I've seen him rub against women standing near the front of the bus. This happened to me about three weeks ago, and I can't stand seeing this guy do it to other people. He stands against a woman at the front of the bus even if there is space to not stand so close and presses his crotch against the woman's body. He becomes visibly aroused doing this, and continues until he gets off. Next time I see him, I am going to report him.
Posted by HollaBackCHITOWN at 4:18 PM

If you are surrounded by people, SPEAK UP.

I have just spent several hours reading the holla back experiences posted by people in DC and Chicago. I did not respond to any of them individually because the postings were rather old, and I would have been typing for hours and repeating myself. I have noticed a pattern. The pattern seems to be ignoring, walking away, or simply taking it, which to me is actually accepting the behavior. I know from experience that it’s hard to think of what to say or do at the actual moment of harassment. Been there - haven’t done anything, either. And cell phone photography is difficult at best, not very fast and oftentimes not possible. But if you’re on a crowded bus or train, it seems to me that a very loud Stop Touching Me would be appropriate. Stare down your attacker. Report the incident to the bus driver AND the transportation authority. Further, an “accidental” yet well-placed elbow (oh, so sorry, this ride is SO bumpy/this train is SO crowded) to the chest or face or groin area (depending on your location, seated/standing) is in order. STOP TAKING IT. Don’t ignore it. If you are surrounded by people, SPEAK UP.

Posted by HollaBackCHITOWN at 9:06 PM

Comfortable Girl (Check it out!)

I get harassed a lot on the street, which pisses me off. I have an illustrated blog called "The Comfortable Girl" and sometimes I illustrate my adventures in street harassment.

Here's one based on an incident that happened yesterday at the mail box at the corner of North and Leavitt.
http://comfortablegirl.blogspot.com/2011/08/guys-are-still-creepy-to-girls-who-wear.html

--LM
Posted by HollaBackCHITOWN at 8:51 PM